– Aliens conquered the world, which means the USA, and they come to the sounds of humans and animals.

– The aliens kill everyone, as far as we know..

– The city is empty.

– The shopping malls are empty.

– So why the heck they take all the kids to the shopping like if it’s safe?

– Poor little kid, I was so mad at him for playing with the toy, but then, he never saw one before maybe, also he grew up not speaking and in silence always… how unlucky.

– So they told him not to play with it. But I guess kids don’t listen and they don’t understand how dangerous it is. And it probably applies to the daughter. She gave the batteries to the kid. Like why?!

– Why did they let the youngest little kid walk at the back of the line? Don’t they suppose to watch him out? Why is he not walking in the middle or the front?

– So while dad was working on a hearing aid for the daughter, found one that actually has a frequency that blocks the life of the aliens. And obviously she had to figure out after the dad dies, and just the last minute.

– Why do they have to make stories that they don’t give a happy ending? Because without the dad, who sacrificed himself, and also how hard he was working on a hearing machine for the spoiled teenager girl?

– In the end, she, at last, accepted that her daddy loved her. It was her fault the little kid died, she was blaming herself, and now she can add the daddy died because of her/his family too. Why didn’t she figure out the alien’s weaknesses sooner?

– Also, she was willing to go fishing, hunting, etc, and the dad says “NO! You’re the girl, you’ll sit here, help your mama, the boy will learn how to take care of you in the future.” While the boy wants to help the mama, he’s scared, and maybe too young. What does it call? Sexiest, traditional, whatever it is… I have a personal history similarly, so I could relate to her feelings and her anger. (Although my dad would support me on my journey, thanks to him)

– The part with the nail, oh boy! That really hurt me. There are millions of nerves in the foot, how much it hurt?! And then aliens came and she stuck in the bathtub while the baby is coming. She had to give birth to herself!

– And the poor little baby, can’t take fresh oxygen, because he can’t cry out loud.

– In the end, they figured how to kill all those bithces, and while all other monsters coming from far, they got the gun and I think going upstairs, since the frequency now out loud in the speakers, and while other aliens are coming and getting paralyzed, they will kill them. 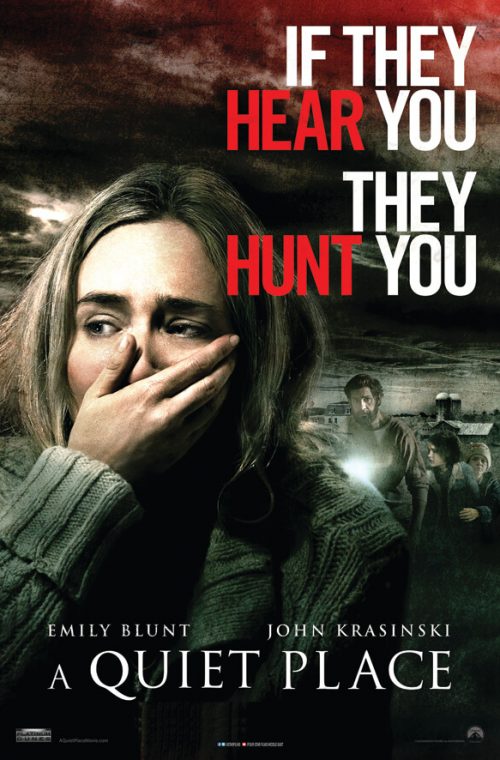 SO, now my questions:

– What if the speaker system breaks down?

– What if the hearing aid, with that specific frequency breaks? Oh no no!

– How many bullets do they have?

– The aliens, how possibly did they arrive to earth? (Maybe irrelative)

– Other cities also got affected? What would it be like in New York?

– Is it they will kill all of them? Or maybe telling other humans they found their weaknesses?

- The ending could be better

I personally really enjoyed the film, I was on edge and clinging to the cinema seat arm rest as if my life depended on it. I was entirely enthralled by the film. Was it perfect? Of course not. There were a number of plot holes and conveniences that caused characters to escape from a number of scenarios unscathed, some of which (upon re-watching the film) were slightly irritating. That being said, this is a type of film that is far more entertaining if one simply watches the film and appreciates the tension it effectively builds and the emotional punch it… Read more »